One of the most recent organizing sensations to hit the United States is the Konmari Method, named after its unassuming creator Marie Kondo. Kondo, who began her tidying journey at age 15, became a household name in the organizing and minimalism community after her book “The Life Changing Magic of Tidying Up” was translated and published in English in 2014. [Note: Kondo’s original Japanese publication came out in 2011]. She followed up with her second book, “Spark Joy”, in 2016.

Kondo’s methodology takes her readers on a different journey than many popular books on organizational techniques. Decluttering fans will already be familiar with tips such as get rid of anything you haven’t worn in a year and narrow down a collection to only your favourite 10 items. Kondo challenges us instead to consider what to keep rather than what to throw away. She suggests that we take a step-by-step approach to deciding what sparks joy. Kondo also shirks the common instruction to organize one room at a time, and tells us instead to organize by category1.

To best understand the KonMari Method, I urge to you read the books. Myriads of lists already exist if you have a mighty need to get started right away, but I believe that the philosophical messages and motivation is lost in attempts to summarize Kondo’s experiences.

Today what I’d like to focus on instead is Kondo’s recommendations for folding clothes. I’ll admit, when I first read her book, I was resistant to folding. I hate moving into an apartment where my only option is drawers rather than a closet. One of my organizational goals has long been to have a closet where I have enough hangers for every item of clothing I own, different sections are colour-coded by hanger, and all of my hangers come from the Container Store. Can you blame me? They’re so pretty!

Kondo suggests folding everything that will fold; T-shirts, pants, skirts, shorts, socks, and underwear. Dresses and some skirts can be hung. My current home has a huge walk-in closet, so I’ve chosen to hang up trousers and shirts as well. Remember, any organizational method has to work for you.

The main tenets of storing anything in Konmari are2:

The biggest comment I hear is, “I have to stack everything because otherwise I can’t see what’s at the back of the shelf”. My solution? Baskets and boxes! These don’t have to be fancy colour-coded items you bought on Wayfair or at the Container Store. Go all out if that’s your thing, or you can grab shoeboxes or cut the tops off of Amazon boxes already laying around your house. I have a mix of soft containers from Marshalls, shoeboxes, and underwear organizers I bought online. I’m then able to pull a single box out from a shelf, and see everything inside as if it were a clothing filing cabinet!

Today I’m going to share with you the basic KonMari technique, and how to use it to fold a thin and soft T-shirt. The basic folding method, as described by Kondo, is as follows2:

You can see below how I’ve used this technique to fold my shirt so it can be easily placed in a drawer or a box in my closet. 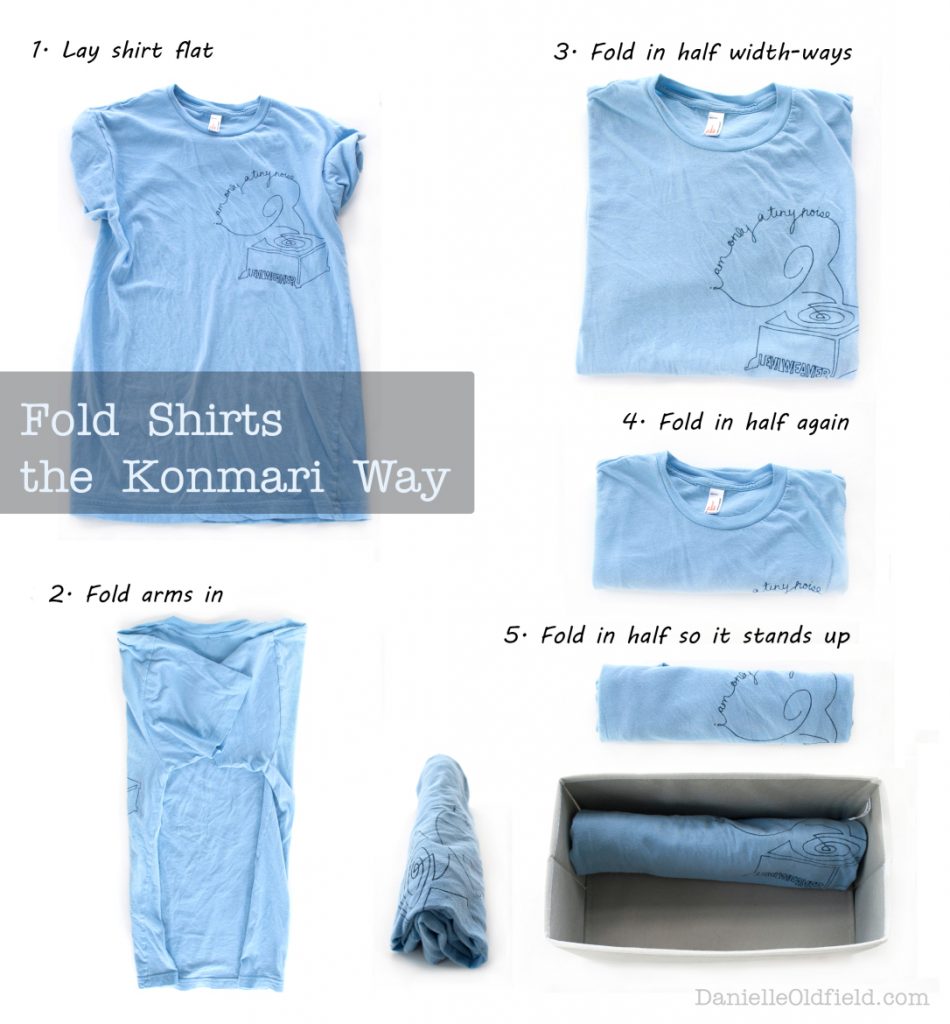 What has your KonMari folding experience been like? Please share in the comments below what clothes you have the hardest time keeping organized. Don’t forget to come back next week for Part Two of my KonMari folding series, where I show you what I do with socks and underwear.

1. The Life-Changing Magic of Tidying Up: The Japanese Art of Decluttering and Organizing

2. Spark Joy: An Illustrated Master Class on the Art of Organizing and Tidying Up